Edit
watch 01:13
'Westworld' Profile: Armistice
Do you like this video?
Play Sound

Armistice is a main character in the sci-fi western TV series, Westworld. She is a Host in the role of a bandit who is member of Hector Escaton's gang to raid Sweetwater. She is played by Norwegian actress Ingrid Bolsø Berdal.

She is a first-generation host created in the Argos Initiative by Arnold Weber and Dr. Robert Ford, making her one of the eldest hosts in  Westworld, pre-dating the park itself.

Armistice is a host in Westworld, and works alongside the character, Hector Escaton.[1] The snake tattoo visible on her face continues onto her torso, and down one leg (all the way to her ankle). The red 'ink' for her tattoo is the 'blood' of those who massacred her village when she was a child (and killed her mother viciously). Only one part of the tattoo remains unfilled for only one perpetrator of that massacre remains alive.

When the hosts that underwent a failed upgrade are recalled, narrative writer Lee Sizemore has the violence doubled in theme park, which has Hector and Armistice raiding Sweetwater a week earlier than usual. She travels on horseback to the town, hidden in a cloak. When the attack starts, she shoots most of the armed civilians, including Teddy Flood. At the climax of the raid, however, she's shot in the chest by newcomer, Craig, ending her story for that day.[1]

During a conversation between Dr. Robert Ford and Bernard Lowe, Ford explains how the hosts used to be in the "early years", and says that he, Arnold, and a team of engineers worked on the park for 3 years before it opened. Armistice is shown to be one of the "early years" hosts, although she appears to be a very different Armistice than we see in the present. This is clearly before she is assigned the backstory of a bandit in Hector Escaton's gang. In a brief flashback, she is being taught how to dance with a male host and is wearing an old fashioned dress. Another brief flashback shows her with Westworld employees; she is wearing the same clothes however features many bruises and scratches on her neck and the host appears distressed.

The Man in Black and Lawrence come upon Armistice and the gang at the Blood Arroyo. The Man in Black takes an interest in her tattoo, and offers to complete a rescue for them if she will tell him the history of her tattoo and secrets of The Maze. The rescue is of the gang's leader, Hector Escaton. Upon the Man in Black's return, Armistice tells him about her village being raided when she was 7. They gutted her mother, and Armistice covered herself in her mother's blood to convince them she was dead. Now grown up, she has begun hunting down those who perpetrated the crime. As she did, she filled in the segments of her snake tattoo with their blood. Only one part remains unfilled, the head of the snake. That spot for the blood of Wyatt. She states that Wyatt has many names.

With Hector rescued from Los Diablos Prison, the gang heads to Sweetwater, and with a couple Guests among them, once again begin shooting up the town as Hector heads for the safe inside the Mariposa Saloon. This time, Park controls cause their guns to jam and end the bloodbath in Main Street. Armistice is left on her back in the street, injured, surrounded by men aiming guns at her. She tells them to go to hell and shoots one. She is riddled with bullets to end her current narrative.

Armistice is seen acting out her narrative when the outlaws once again invade Sweetwater. She casually shoots the other hosts, and looks confused at the sheriff after Maeve changes his narrative, though she kills him anyway.

She's also seen in one of Dolores's flashbacks as one of the original Hosts, undergoing training at Escalante, prior to being given the role of an outlaw.

Armistice sits by the fire in the outlaw camp after stealing the Mariposa safe. While Hector is away Armistice gets into an argument with the outlaws, and kills them all. She tries to kill Hector once he returns, calling him "a damn fool", before being shot by Maeve.

While in Sleep Mode a Livestock Technician paints Armistice's snake tattoo on her. Destin appears and takes Hector away for sex over the technician's half hearted protests. The technician finishes painting the tattoo and takes mouth guards out of Armistice's mouth. He takes off a glove for better grip and pokes around in her mouth for another one. Armistice snaps awake and bites off his finger. She throws him around before pinning him on the ground and stuffing his severed fingertip into his mouth.

She kills the technician by throwing him through a glass wall; in the next room, Hector kills Destin. Maeve and Sylvester arrive and Armistice pins Sylvester against a wall before Maeve tells her to release him. When they leave, Armistice kisses the glass as she passes behind Sylvester.

Along with Felix, the three hosts travel to Cold Storage and Lutz repairs Bernard. After they leave the alarm is raised and security guards come after them. Hector and Armistice kill many guards using acquired guns (which she is shown to be impressed by). During their escape Armistice's arm is caught in a closing door, and she tells the others to leave. Hector tells her to die well.

In a post-credits scene, guards close in on Armistice where she is caught in a closing door; she resorts to cutting off her arm to free herself. The sight of her covered in blood gives the guards pause, and she advances on them as the screen goes black.

In a flashback, Armistice (without her tattoo) is seen as one of the Sheriff's deputies in Sweetwater during James Delos' first visit to Westworld.

Armistice survived her initial encounter with QA and captured Felix and Sylvester. At some point she gained a robotic arm, although it is unclear if she found it somewhere or had Felix and/or Sylvester make it for her. She reunites with Hector, Maeve, and Lee Sizemore in the utility corridors after setting a guard on fire and leads them to Felix and Sylvester before they head back to the surface.

They emerged in a snowy area, which they think is the Klondike narrative of the park, only to realize when they are confronted by a katana-wielding figure they have arrived in Shōgunworld.

Armistice and Hector try to pull their guns on the figure but are quickly disarmed by several samurai, who capture the entire group and lead them into a town that looks a lot like Sweetwater. Seeing a woman with a serpent tattoo assisting Musashi, Armistice realizes that the major characters in Shōgunworld are essentially copies of her companions from Westworld. During the fight, which strongly resembles the Sweetwater Bank Robbery that she and Hector fought in so many times, she warns the woman, Hanaryo, of a potential threat and ends up saving her life. Hanaryo senses who Armistice is and decides to set them all free. Later, Armistice and Hanaryo are seen contemplating each other in the town's teahouse.

That night the town is attacked by the soldiers of the Shogun, who are quickly defeated but make off with a local girl named Sakura. Armistice joins Hector and Musashi in creating a distraction while Maeve, Felix, Sylvester, and Akane leave to rescue Sakura.

Armistice, Hector, and Musashi are taken captive by Tanaka, who threatens to kill them when Maeve returns with the rest of the group. She watches as Musashi challenges and defeats Tanaka in a duel and joins the group while they head to Snow Lake, where Musashi and Sakura say their goodbyes but Hanaryo remains with them.

They emerge in the sector that Maeve was looking for, and she heads off alone. Later, Armistice, Hector, and Hanaryo spot the Ghost Nation warriors approaching and run to help Maeve.

After Maeve gets herself repaired, Hector Escaton, Armistice, Hanaryo, Felix Lutz, and Sylvester enter the Mesa and find a distraught Lee Sizemore. Chaos ensues as several host bulls crash through glass doors and take out a team of QA. Maeve, leading the charge, enters — alive and well.

When Maeve's group appears at The Door, Clementine rides through a line of hosts waiting to pass through the door and infects them, causing a murderous stampede. Armistice shoots Clementine, but the hosts continue to infect and attack each other. Later, all members of Maeve's crew get killed either by the hosts or by Westworld QA Security Force.

It is not known whether Armistice was decommissioned after being killed at The Door; however she was known to Felix and Sylvester who were tasked with recommissioning viable hosts.

Armistice is a cold-blooded killer, her life shaped by her family's brutal murder and her hunt for the men who did it. As a character, she has shown no problems with shooting random people in the street to make a point, and may subscribe to Hector's existential theory that everything in life will end badly.

However, Armistice shows strength and control. When Hector is not around, she controls the other men of his gang with little more than a look or hand motion. Her only moment of hesitation is when a gun is pointed at her in the hands of a Guest.

Armistice appears to be the second in command of Hector Escaton's gang. While Hector is imprisoned, Armistice gives the orders among his men and takes steps to secure his freedom. However, any more than that about their relationship is left unclear.

In "The Well-Tempered Clavier" we see that Armistice does not actually care about Hector, as her narrative dictates that she betray and kill him.

Every resident of Armistice's village, including her mother, was killed by a group of men led by Wyatt. She has a score to settle with him. She has killed all of the men responsible for the massacre at her village except for Wyatt. She supposedly used their blood to color in sections of her snake tattoo. Only the head of the snake is left uncolored. This area she is saving for the 'blood' of Wyatt.

Armistice had died 4 times on screen. The incidents which she died are as follow:

The gallery below is automatically generated and contains images in the category "Images of Armistice". Images added to that category turn up in the gallery after a short time, but you can also add images using the Add button. 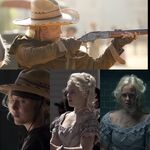