Caleb Nichols is one of the main characters in Season Three of Westworld. A war-veteran, Caleb is a blue collared worker whose primary occupation is that of a construction worker but he occasionally takes extra criminal jobs through the RICO app.

His co-worker is George, a Delos model G-267. He also commits heists for the app Rico to earn money and occasionally works with Ash and Giggles, to pay his bills and his schizophrenic mother's medical treatment.

Caleb Nichols was born either in Los Angeles or elsewhere in the United States. As a child he would go once a year to a diner in L.A. with his mother for his birthday. One such day, Caleb was left by his mother who promsied she'd come back for him. But hours past and a waitress named Sara became concerned for Caleb. The young child said his mother didn't abandon him as that's not what she would do which prompted a waitress named Sara to give him a cheesburger and a strawberry milkshake to help calm his nerves. Out of anxiety of the situation and fear, Caleb wound up vomitting instead.

Eventually Sara called social services to retrieve Caleb. It would be six months later that Caleb's mother was found. She was diagnozed with paranoid schizophrenia which explained why she suddenly abandoned Caleb seemingly out of the blue. This event would have a lasting emotional effect on Caleb and when being reminded of it by Dolores later in life, descrbed himself as feeling "enraged". Despite this, Caleb maintains a closeness to his mother as he supports her medical care and costs s as a grown man.

At an unknown point in his life, Caleb joined the military. One of his fellow soldiers he befriended was Francis, an African American. The two were close and fought over seas in an unknown war. The two shared a lot in common in approach to world view with Francis' beliefs being carried on by Caleb who continued to view the world and the systems that controlled it as rigged. Presumably it was in the military where Caleb learned medical skills which allowed him to know what injuries a person could have and how to treat them without the assistance of computers.

During their military tour, Francis was shot and killed while escorting an individual to a vehicle. Caleb found Francis but was unable to save his life. The event devestated Caleb and would also leave an impact on his worldview and he would later remark that he wished Francis was still alive. Out of grief and with a deterorating mental state when back in L.A., Caleb would download an App which recreated Francis' voice and thoughts in the form of an A.I. Caleb would then recieve calls from "Francis" and periodically speak to him to talk about his work, his mother, and his life overall.

After returning to the United States, Caleb became a construction worker, a job on the lower end of the class system with meager pay for his living. He would be paired with the Delos model G-267 robot "George" in his construction job. At an unknown point Caleb's mom would be placed in a psychitric hospital in which - connected to the systems - would be put in a relaxed state. The cost of keeping his mother there was high however which also frustrated Caleb.

Caleb would go for interviews to try and get a job in a higher position to boost his social standing to make more money and improve his and his mother's life. But repeatedly Caleb would be turned down by each employer he interviewed with which furthered his own anger and bitterness. In order to keep making money to remain stable, Caleb would download the "Rico" app designed for Criminals that wasn't monitored by the wider computer systems of the world. At some point Caleb worked alongside Ash on a job which involved "Mexican diesel".

Caleb is first introduced awakening one morning in L.A. to begin a regular day.

Caleb returns to the park and approaches the front of the underpass. He spots a woman walking through the dark and notices she is limping and Caleb calls out to her. Dolores is then revealed in the light and falls over only for Caleb to run over and catch her in his arms.

Caleb seems to be somewhat noble and brave and a bit reckless. At the point of his introduction Caleb appears to be bored, depressed, and frustrated at his lot in life. He is required to speak to a mental health counselor which he generally is uncopverative towards showing a possible anger at authority and mistrust of others. Being suddenly abandoned by his schizophrenic mother at a young age traumatized Caleb and was likely the start of his lack of confidence and trust in other human beings. When Dolores revealed knowing nearly every entire detail of the event Caleb expressed that he was enraged at the invasiveness and possibly at the memory being brought up.  Caleb's only close friend was Francis with whom he served a tour of military duty with abroad. It is unknown of Francis was Caleb's commanding officer but Caleb speaks in reference to Francis like a superior. Francis would express many beliefs and ideas about the wide world, the computer systems that ran it, and the social systems which affected humanity. Caleb would internalize these beliefs which helped him cope with his troubles and mental state. Francis' death greatly affected Caleb enough to have an A.I. made in his image and tearfully expressed his pain of not having Francis still around. 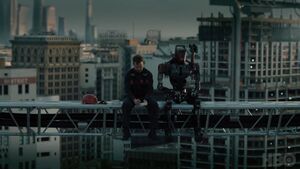 Caleb, alongside George, while working
Add a photo to this gallery

Retrieved from "https://westworld.fandom.com/wiki/Caleb_Nichols?oldid=33220"
Community content is available under CC-BY-SA unless otherwise noted.