Control units are used to store hosts' mind. They are printed by specialised 3D printers, these are relatively unusual, enough for Elsie Hughes to comment on finding one when exploring a remote lab in The Riddle of the Sphinx, with Bernard Lowe.

When installed in a host's head, they are contained in a tough, white, spherical container called cortical shield, tough enough to resist damage from a handgun at point blank range.[1]

In "Journey Into Night", hosts are shown to carry an intra-cranial "control unit" (a combination CPU and data storage module) capable of recording video, audio, experiential data and a guest's DNA. The module — roughly the size of a baseball and shaped somewhat like a wafer-cup ice cream cone — can be extracted surgically and inserted into an external device's reader port for offline downloading.

According to Nolan, the core of the control unit is a golf-ball-sized transparent "neuroplastic" sphere informally called a "pearl." Within the pearl are densely-packed microscopic filaments of neural material that are ostensibly the organic analog to the RAM (Random Access Memory) and EEPROM (Electrically Erasable Programmable Read Only Memory) of a computer chip. These filaments contain the programming and memory for the host — in effect, they are the soul of the host.

One way to distinguish hybrids from hosts is the color of their control units, hosts have black control units and hybrids have red ones.[citation needed] 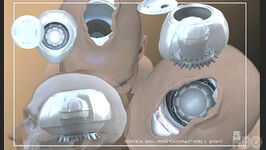 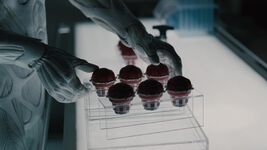 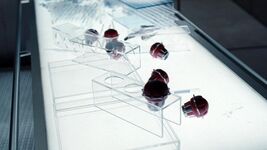