104 minutes
Futureworld is the 1976 sequel to the film, Westworld. It was directed by Richard T. Heffron and written by Mayo Simon and George Schenck. The sequel takes place two years after the events of Westworld when the Delos corporation owners have reopened the park.

Two years after the infamous Westworld massacre, the Delos corporation has invested over $2 billion in debugging its androids, and putting in place extra safety measures. Delos has been rebuilt and guests can choose from four areas of the park: Medieval World, Roman World, Spa World, and Futureworld. Westworld is still shuttered.

The general public is still wary of the robot rampage, and Delos is attempts to assuage these fears. Hoping for positive publicity, Delos invites newspaper reporter Chuck Browning (Peter Fonda) and TV reporter Tracy Ballard (Blythe Danner) to review the park. The two soon learn terrible things are still happening at Delos. Instead of problems with the androids killing humans within the park, Futureworld is ultimately about Delos being caught making android copies of world leaders. 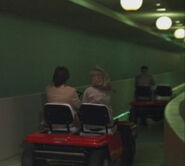 Behind the scenes of "Futureworld" 1976 featurette
Français
Community content is available under CC-BY-SA unless otherwise noted.