"Chestnut"
The Ghost Nation are to a large group of Hosts representing a stereotypical hostile Native American tribe as commonly depicted in Western-genre films. They usually speak in Lakota, but have spoken English to a few guests/hosts.

After the Confederados attack the train that Dolores Abernathy, Lawrence and William are travelling on, the three escape along with a few others and ride away from the ambush, with the Confederados in pursuit. They pick off the survivors until only Dolores, William and Lawrence are left, when they are suddenly attacked by a group of Ghost Nation warriors. The Ghost Nation savagely kill all the Confederados, allowing the trio to escape.

Ashley Stubbs leaves the Mesa Hub and enters the park to locate Elsie Hughes. When he arrives however, members of the Ghost Nation are there. Instead of listening and obeying Stubbs vocal commands, they attack him.

When the Delos rescue team lands on the beach of the park (approximately two weeks after the slaughter at Escalante), they locate a dead host who apparently was of the Ghost Nation people. His host core is extracted right on location in the field, which is revealed to be a palm-sized white cylinder with a socket. The team inserts this into their tablet and get access to the dead host's last memories. It turns out that the host, as he was speaking in Lakota, was shot down by Dolores , who told the host (referred by her as "friend") that "not all of them were going to make it to the Valley Beyond"

Two Ghost Nation warriors confront Maeve, Hector, and Lee Sizemore, triggering PTSD-like flashbacks in Maeve. Maeve attempts to control the Ghost Nation hosts as she has done with other hosts, but the warriors do not respond to her commands. Meanwhile, Grace is crawling on the shore of Westworld. As she tries to regain her bearings, she looks up and sees the faces of three Ghost Nation warriors, Daniel TwoFeathers and Geronimo Vela, one of whom is wielding his scalping knife.

"The Riddle of the Sphinx"[]

The Ghost Nation takes Grace hostage after finding her on the shore. They take her to their camp where only humans are being kept alive, and throw her next to Ashley Stubbs. Grace later escapes, but Stubbs gets a knife placed on his throat, and a member whispers to him (In English, whereas they had previously only spoke in Lakota), "You live only as long as the last person who remembers you." After a dramatic movement of the knife, they spare Stubbs' life.

The gallery below is automatically generated and contains images in the category "Images of Ghost Nation". Images added to that category turn up in the gallery after a short time. 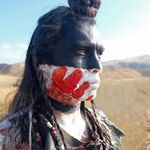