The kukri is a traditional Indian and Nepalese curved knife, in popular use for many centuries, well into the 20th century. Kukris were multipurpose knives, used for the outdoors, as hunting sidearms, and most famously, as military sidearms. When used as weapons, they can be used for thrusting, cutting and drawing cut attacks.

The typical kukri knife has a somewhat assymetrical blade, with a widened, slightly leaf-like shape in its front half, usually after the main curvature. The blade of a kukri tends to have at least one shallow fuller, though their number can vary. It also generally includes a small notch near the handle. (Though it might seem the notches were used to prevent the knife from falling out of the sheath, the real reason for their inclusion was probably decorative and religious.) Kukri scabbards copy the shape of the blade and the knives require a particular style of movement for skillful unsheathing and especially sheathing.

They have only been seen in The Raj, worn as sidearms. They seem to play a similar role in that particular park to the Bowie knives and hunting knives seen throughout the Wild West themed Westworld.

Ganju setting out to attack Emily with his kukri 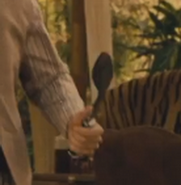 Retrieved from "https://westworld.fandom.com/wiki/Kukri?oldid=27374"
Community content is available under CC-BY-SA unless otherwise noted.