Start a Wiki
watch 01:17
'Westworld' Profile: Lawrence
Do you like this video?

Lawrence is a Host criminal who is on the verge of being hanged when the Man in Black saves him. He is married and has a daughter and has also been known in the criminal underworld as El Lazo. He is a leader of Revolutionaries, and the exact story behind this dual narrative is still a mystery to the fans. He is portrayed by Clifton Collins Jr..

Lawrence is saved from hanging by the Man in Black. The MiB recruits him to help find The Maze. He takes Lawrence to his home and threatens to kill his family if he doesn't tell him where the Maze is. The MiB ends up killing Lawrence's Wife before Lawrence's Daughter reveals how to find the Maze.

The Man in Black and Lawrence join up with outlaws led by Armistice. She agrees to tell them the story behind her tattoo if they help her rescue Hector Escaton. They purposely get themselves captured and Lawrence is tied to a post before a firing squad. The MiB and Hector save him before the Marshall Pruitt can put a bullet in him. The MiB and Lawrence leave the group in search of Wyatt, but as they journey onward they come across a badly beaten Teddy.

Lawrence is killed by the MiB in order to give Teddy a badly-needed blood transfusion. In another part of the park, Dolores encounters a different version of Lawrence known as Alonso, who is an owner of a brothel. He betrays the Confederados by giving them tequila instead of Nitro. He is last seen on a train towards the front with Dolores and William. 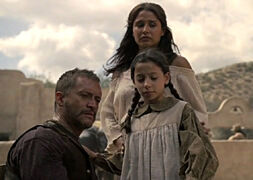 Lawrence's family
Add a photo to this gallery
Retrieved from "https://westworld.fandom.com/wiki/Lawrence?oldid=9025"
Community content is available under CC-BY-SA unless otherwise noted.