Start a Wiki
watch 01:13
'Westworld' Profile: Peter Abernathy
Do you like this video?

Peter Abernathy is the father of Dolores Abernathy and a host in Westworld. His ranch is not far from Sweetwater. He is a cattle rancher.

While working one day on the ranch, Peter discovers a photograph buried in the ground next to a paddock. He takes it home with him and obsessively wonders about where the picture was taken. He shows it to his daughter, but she says she doesn't see anything. The next morning, Dolores finds that her father has been awake all night looking at the photograph. He tells her that he had a question that he's not supposed to ask which gave him an answer that he's not supposed to know. He tells her that she should leave and that all of the devils from hell are with them there. He whispers something into Dolores' ear. Dolores later reports that he whispered, "These violent delights have violent ends". This is one of Friar Lawrence's lines from Shakespeare's Romeo and Juliet.[1]

All of the hosts that were recently upgraded (this upgrade had the reverie code) are recalled following the malfunction of the host named Walter. Dr. Robert Ford interviews Abernathy in order to find out why Abernathy has "breached" and also why he was able to see the photograph of the woman in the city. (In a subsequent episode, Elsie reveals that a breach is when hosts have memory recall of previous builds.) This is aberrant host behavior, or in the jargon of Delos Destinations it is an "aberrancy". Abernathy tells Ford that he must warn Dolores, and that she's "got to get out". Abernathy accesses fragments of his prior build as "The Professor", the leader of a cannibalistic cult, even when Ford tells him to access his current build.

Theresa Cullen says that the policy for hosts that "breach" is that they have to be "put down". This host (credited in the show as "Old Peter Abernathy"), along with the Walter host, is lobotomized, decommissioned, and put in Cold Storage.[1]

Elsie Hughes investigates why the host that played the Peter Abernathy character breached. She tells Bernard that the modern photograph does not appear to be the cause of the breach, because his reaction was not immediate like the other hosts.

Charlotte Hale brings Lee Sizemore to Cold Storage. They find the host that played Peter Abernathy and was lobotomized. Charlotte tells Sizemore that she is uploading 35 years of data to the host. Hale tells Sizemore to give Abernathy just enough of a personality to enable him to get on the train with the guests at the Monorail Terminal in the Westworld Mesa Hub and leave Westworld. (How Hale plans to remove the explosive in the C6 vertebra is not discussed.)

Hale enlists the help of Bernard to find the decommisioned host Peter Abernathy. He also appears quickly in Bernard's flashbacks. 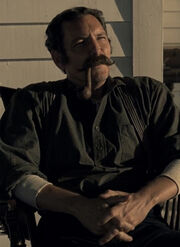 After the Peter Abernathy we see Dolores with in The Original shows evidence of corrupt code, he is lobotomized and decommissioned to Cold Storage. This Peter Abernathy is credited in the show as "Old Peter Abernathy". In the last scene of "The Original", Dolores wakes and walks onto the porch to greet her father (this is part of her rancher's daughter loop). The new Peter host is now playing the role of her father, and Dolores doesn't notice the change.[1]

During one of the loops in which the Abernathy Ranch is attacked by bandits, Dolores looks at her father lying dead on the ground. She remembers her previous father lying in the same place, and this confuses her (because host memories are so clear that the hosts feel like they are reliving past events.[2]

The host who is tasked to play Peter Abernathy after the events of The Original, also played the role of a bartender at the Mariposa Saloon.

Peter Abernathy had died 2 times on screen. The incidents which he died are as follow:

The gallery below is automatically generated and contains images in the category "Images of Peter Abernathy". Images added to that category turn up in the gallery after a short time.

Retrieved from "https://westworld.fandom.com/wiki/Peter_Abernathy?oldid=32118"
Community content is available under CC-BY-SA unless otherwise noted.