A Quantum AI computer system owned and operated by the Incite corporation. It is used for the social engineering of whole populations.

Rehoboam is a quantum computer system created by brothers Engerraund Serac and Jean Mi, financed by Liam Dempsey Sr. and his company Incite Inc. It is arguably the world's most advanced AI, maintaining control over its own system.

Rehoboam's main function is to impose an order to human affairs by careful manipulation and prediction of the future made possible by analysis of the large data set Incite have collected.

The system's principal design went through many iterations, with names like Saul, David and Solomon before finally culminating in Rehoboam. (The four names being names of Israel's first 4 kings) The Solomon build 0.06 was the first of the prototypes to show real promise with the ability to predict the last few decades accurately from historical data in 2039.

The systems were created by Serac and his brother. Liam Dempsey Sr. would later take credit for the design and spin the narrative that he had designed it in a single weekend with the system not being built for another fifteen years. Liam Dempsey Jr. revealed to Dolores Abernathy that after his father's death, the system locked him out, leaving him unable to access, change or shut the system down.[1] The actual physical system is in Los Angeles, California at the very bottom of a building owned by. Incite Inc.

Incite Inc. used Rehoboam to analyse the files of millions of human subjects. With that data the system is able to predict the course and the outcome of individual lives. The system is capable of predicting how, and when, a human subject will die.[2]The system is so powerful that Serac is capable enough to threaten the president of Brazil to bring down his government and to talk with president's replacements within 6 weeks. Every company in the near future needs Rehoboams assistance for their business.

Three months after the disaster and downfall surrounding Delos' parks, Rehoboam detected a threat to its systems, but Liam was unable to determine the cause. Serac, who controls the system, discovered that the threat was Dolores, and started to fight back using Maeve Millay - employing a mixture of blackmail and bribery to ensure her cooperation.

Rehoboam is later tasked with sifting through each of Dolores Abernathy's memories in a bid to find the encryption key to the Sector 16 data. When Rehoboam is unsuccessful, the memories are deleted. Unbeknownst to Serac, control of Rehoboam was transferred from him to Caleb Nichols upon wiring in of Dolores. When Maeve reveals this to Caleb, he orders Rehoboam erase itself.[3] 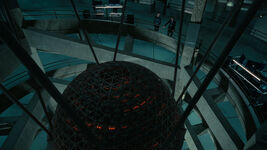