A robot (or android) is an artificial creation designed to mimic a human being or animal. They are used in the Westworld park as part of its storylines, for the guests' entertainment.

In the original 1970s film series and the short-lived 1980 Beyond Westworld TV series, the theme parks of the Delos resort are populated by robots (also referred to as androids), who portray life-like human or animal characters, based on their construction and intended role. Some of the human robots also perform work as resort employees, usually as guides to the resort's visitors.

Under normal circumstances, the robots are incapable of harming, least of all killing park visitors. Their programming, along with certain safety precautions like heat sensors on firearms, prevent them from harming guests. Robot characters portraying antagonists (e.g. the Gunslinger of Westworld, the Black Knight of Medieval World, fauna like rattlesnakes in Westworld) seem to focus on intimidating or challenging guests, but without the actual ability to fulfill their threats.

The events of the original film depict a major crisis situation, in which a mysterious programming malfunction spreads through the resort's systems in the manner of a computer virus. This gradually rids many of the robots of their typical inhibitions, turning harmless artificial actors into deadly, unpredictable machines.

An overview of known robot characters in the 70s films and the 1980 series.

Homage in the HBO series

The HBO series features many in-jokes and allussions to the depiction of the robots in the original 70s iteration of the franchise.

The older generation of hosts seems to be the reboot's reimagining of the robots from the original 70s series. Their internal construction is very similar in spirit (though not identical) to that of the 70s series' robots.

Dr. Ford mentions that the oldest prototypes of hosts from the first generation lacked convincing hands, and staff could tell them apart with a handshake. Some of the older generation models are depicted with an opening head compartment, similar to the head compartments openable by hand from the 70s films.

Ford seems to have a nostalgic fondness for the older generation of hosts, remarking to Bernard that "what the new models gained in efficiency, they lost in grace". His feelings are at least somewhat shared by The Man in Black, who tells Teddy he prefers the earlier, more mechanical iteration of the hosts.

Miss Carrie, the brothel madam at the saloon

Robotic rattlesnake in a threatening pose

Thermal vision in a room lit with torches

The Gunslinger's body reacting after being attacked by acid

The Gunslinger sparking, after finally short-circuiting due to extensive damage by fire

A rattlesnake killed by guest gunfire

The metallic components in the snake's head revealed

The body of a rattlesnake opened up for inspection, showing exposed circuitry

Robot actors at a jousting tournament in Medieval World

Robot horse used at a jousting tournament in Medieval World 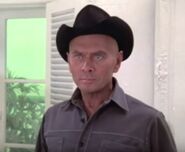 ...to both help and cause havoc

The series' variation on robot sight