Saloon Heist is a narrative that can be played while in Westworld.

Though the precise storylines of the Saloon Heist varies with each repetition, depending on the level of envolvement with the guests. The basic storyline still can be inferred from the episodes.

Hector Escaton is broken out of the Ojal Prison and reunited with his gang. They ride into the town of Sweetwater to rob the safe from the Mariposa Saloon & Hotel. As they approaches the saloon, the gang is stopped and questioned by Deputy Foss. Hector shoots and kills him. Hector then enters the saloon and Armistice starts to indiscriminately shoot the lawmen and the townspeople. In the saloon, Tenderloin tries to take Clementine with them, and is killed by Maeve. After the gang succeeds in the heist, they return to the Sweetwater Hills. In the hills, as the gang couldn't open the safe, they fall into a quarrel over what to do with the safe. And it ends with them all got killed by each other. 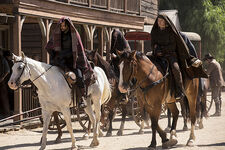 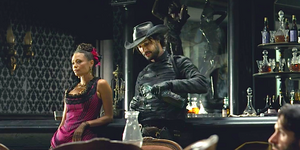 Hector and Maeve in the saloon 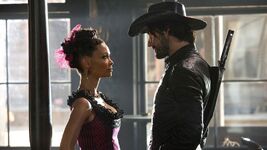 Hextor and Maeve in the saloon 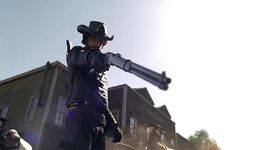 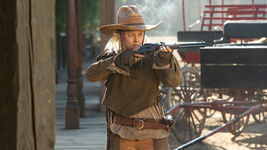 Armitice during the heist
Retrieved from "https://westworld.fandom.com/wiki/Saloon_Heist?oldid=32311"
Community content is available under CC-BY-SA unless otherwise noted.