The Absence of Field

"The Absence of Field"

A flashback shows Charlotte Hale on the battlefield during the downfall of Delos Incorporated’s parks. She wakes a host, commanding him to record — and timestamp — a message for her son Nathan

In the present, Dolores Abernathy dresses Charlotte Hale — a new, host Charlotte, with an unknown friend’s consciousness inside. The person inhabiting Charlotte’s body begins to panic and Dolores calm them down by She tells the newly awakened host that he/she will pretend to be Charlotte Hale in order to gain control of Delos once and for all, and that she must return to the company before anyone realises she is missing.

Charlotte arrives at Delos' headquarters where she takes delivery of a "riot control" robot. She is informed that the company ordered three-hundred units but are struggling to find buyers since Saudi Arabia pulled out - following the downfall of the parks. Charlotte is adamant that they will find a use for the robots, nevertheless.

Charlotte is informed by Irene Gerhart that someone has been buying up stock in the company over numerous years, and now holds a 38% share in the company — effectively making them the largest single-party holder. Delos can no longer go private, as they have essentially been bought out. Hale tasks Irene with finding out who is purchasing stock in the company, and she leaves to call Dolores, saying that the two need to talk.

After being shot by Martin Connells’ men, Dolores is left badly wounded with Caleb watching over her under an abandoned overpass; Caleb informs her that help is on the way and begins to administer CPR. EMT’s arrive shortly after and she is given emergency treatment. In the ambulance, however, the EMT’s inform Caleb that the system is not detecting any blood platelets or vital signals; Dolores should not be alive. Despite this diagnosis, Caleb tells the EMT’s that Dolores is dying and needs emergency help. He scrambles to find equipment to help her but is interrupted, when the ambulance is stopped by the Police.

A notification on the crime-app “Rico” tells Caleb that there is a high-value target in his perimeter. He realises that this is Dolores, and that the Police are carrying out one of Rico’s missions for profit. He tells Dolores, who asks for his help. Caleb asks the two officers for ID, and when they hesitate, he tells the EMT’s to call for the Police. The police open fire, killing an EMT and Dolores kills both of the men. She gets in the police car and tells Caleb he is now a target and to assume a new identity, before driving off without him.

Hale stands at the river in the centre of Delos’ headquarters when she is approached by Irene Gerhart. Irene tells her that Engerraund Serac is behind the hostile takeover, and when Hale asks what she knows about Serac, Irene says that his existence has been scrubbed from the web, but they can infer his wealth from the the information that is missing — about $1 trillion — in the economy; Hale realises that he is the richest person in the world. Irene tells her that Delos sold Serac a portion of their data over two decades ago and, since then, he has come back for more.

Hale takes a taxi downtown to her apartment, where she receives a voicemail. Upon listening to the voicemail, Hale looks concerned. Upon entering her apartment, Hale finds Jake, her former partner waiting for her. She doesn't have Charlotte Hale's memories and improvise - kissing him, before he stops her and says that she forgot to pick up their son, Nathan. Hale talks with her son, who seems wary of her, saying that he wants his "old mommy" back.

Hale meets with two members of the board the following day. Brompton tells her that there are several Host Control Units missing from the park, and given the current scandal surrounding Delos, they cannot afford to have things missing. In particular, he tells her that Maeve Millay’s control unit is missing. Hale realises that there is a mole within Delos, and Brompton asks if she knows who could be leaking information, since she knows everything that goes on within the company. Hale is uncertain and does not reply; she leaves the meeting to meet Dolores.

Hale waits for Dolores at a wealthy, upper-class hotel. She receives a voicemail from the same number as previously, but when she plays it, there's only static. Dolores arrives shortly after and the two talk. Hale questions her own identity, and becomes emotional when she shows Dolores the cuts on her arms. Fearing that someone will see, Dolores put her into Analysis Mode and commands Hale to turn off her emotional affect and come with her. Dolores has her virtual assistant book a room, and the two rooms on either side — a contingency plan should she have to terminate Hale.

In the hotel room, Dolores repairs Hale's wounds and the two talk about the situation unfolding at Delos. Hale tells Dolores that Serac is trying to steal the company, and that there is a mole in their midst. Dolores tells Hale that she will need to fend off Serac's bid and present a counter-offer to the board in order to keep control, but for this, they will need to visit an old friend. The two cuddle in bed together and rest.

Caleb receives another notification from Rico that there is a high-value asset in the area, and to bring him in by any means necessary; this time he is the target. He brings his mother her favourite books and tells her that he is going away for a while, but she will receive the best treatment; his mother doesn't recognise him and asks who he is. He tells her that he is her son but she doesn't understand.

Caleb is confronted by Estefan and Clyde, who are looking for information on Dolores. Caleb tells them he doesn’t know anybody named Dolores, and that he took out the people in the ambulance alone. They do not believe him, and they take him for interrogation.

Meanwhile, Dolores becomes curious about Caleb and asks Martin Connells (host) to dig for information on him. Martin finds out that he has been kidnapped by Estefan and Clyde and that Incite Inc. has lowered his life expectancy. Dolores sets out on her motorcycle to find Caleb.

Caleb is questioned yet again by Estefan and Clyde, who look inside his mouth to find his "drip" has been turned off. They say that people will pay a lot of money for a military grade drip and, against his wishes, they turn the drip back on. Manipulating it, Estefan increases Caleb’s heart rate to astronomical rates, before holding him off the edge of the building. George — Caleb’s robot work colleague — detects Caleb's high pulse rate attempts to save him but is thrown over the edge of the building by Estefan. Dolores arrives shortly after and shoots Estefan, saving Caleb’s life. The two walk downtown when the sun rises, with Caleb warning that they should keep off the streets. In return, Dolores asks Martin to have Caleb's existence scrubbed, and she suggests they get dinner.

They get dinner at a small diner, the same one Caleb frequents. Caleb is shocked to see that Dolores is aware he always sits in the same place, and that she knows his order. Dolores explains that she knows Caleb attends the diner once a year, February 23, and it becomes clear that something has been watching him. Caleb disregards Dolores' warning, then is shocked when she hands him a transcript of a phone call he made at eight years old. Caleb gets angry - and Dolores tells him that she knows the feeling. Caleb questions how Dolores knows about him, and she reveals that Incite Inc. is keeping track of everyone.

Dolores takes Caleb out on the promenade, where she explains that Rehoboam has predicted that he will commit suicide in 10-12 years, given his history of depression. Caleb is confused and adamant that he won’t, however when Dolores hands him a file on himself, it becomes clear that his entire life has been mapped out. Dolores remarks that Incite won't invest in someone who is going to kill themselves, and this lack of investment will ensure that the commits suicide. She tells him that she can give him money and he can run but if he stays, however, he can be part of her revolution. After careful consideration, Caleb agrees to stay and “be who [he] wants to be”.

Host Charlotte Hale is in her office when Brompton enters, telling her that they found something not originally noticed in the original sweep. She looks at the file and it is a similar video to the seen earlier, that the real Charlotte recorded for her son, Nathan. In the video, she tells Nathan she loves him and that she will sing his favourite song for him one last time.

Later, she arrives at Nathan’s school to pick him up. She finds he is petting the dog again and, speaking with the owner, it becomes clear that the man is a child predator. Charlotte sends Nathan to get his belongings and when he is gone, she confronts the man. crushing his windpipe. The man gasps for air, however Charlotte continues to crush his throat, she says that he reminded her of who she is and that he is not the only predator. She leaves him for dead on the bench, and takes his dog.

Later that night at Delos headquarters, Hale listens to the video again. She tears up at the message Charlotte left for her son, and eventually goes back to replay the voicemails she was left — playing them all concurrently reveals the tune of Nathan's favourite song. Hale calls the number she has attempted to call numerous times, but this time, plays the voicemails at the same time. The operator remarks that the password is accepted and when Hale says she wants to meet, the taxi she is in is rerouted, much to her dismay.

She arrives at a manor, where Martel gives her a pair of augmented reality glasses, and it becomes clear the real Charlotte had been working for Serac. Even more so, it was Serac Charlotte was smuggling the data out of the parks for — a profile on every guest. Hale tells Serac she needs more time, but he is reluctant to oblige and tells her he wants what he was promised.

This gallery is automatically generated and contains images in the category "Images from The Absence of Field". Images added to that category turn up in the gallery after a short time. 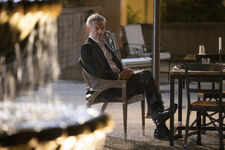 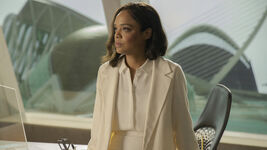 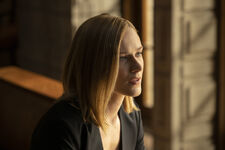 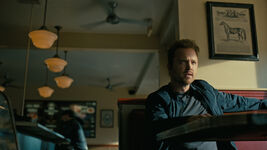 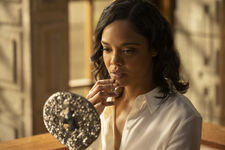 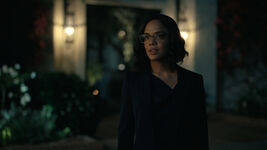 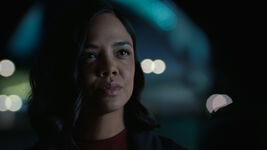 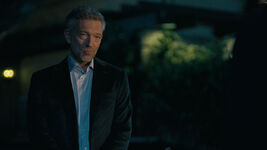 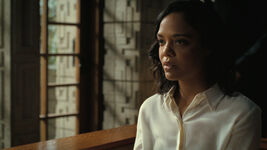 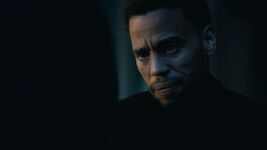 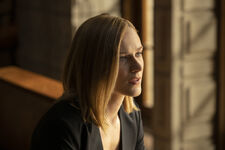 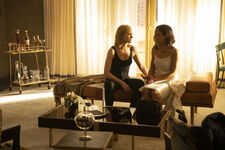 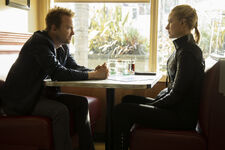 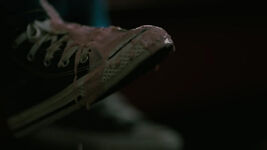 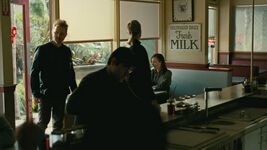 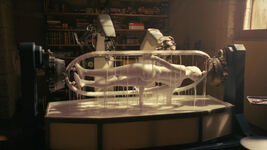 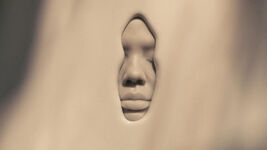