A simple, solitary farming house in a prairie area of Westworld

The Homestead is a location in the Westworld park. It consists of a single wooden farming house, some sheds, and a small yard with a clothes line and a wagon.

The exact location and official name of the site is unknown, but the homestead seems to be tied to narratives involving the Ghost Nation, particularly narratives in which native warriors attack the inhabitants of the homestead.

The homestead's known host inhabitants included Maeve Millay (before she was reprogrammed and reassigned to the Mariposa Saloon), the Homestead Girl (portraying the homesteader's young daughter) and a "New Mother" host (encountered by Maeve when she tries to visit her daughter again). Maeve's memories of her previous life in the homestead with her daughter become one of the main driving forces behind her personal quest to learn more about the nature of Westworld.

There is a small graveyard near the homestead, a relatively short walk away, with an access hatch to the Westworld maintenance facilities hidden beneath one of the graves. Lee reveals this to Maeve when he eventually leads her back to her old home during the events of the second season.

Maeve and her daughter resting on the porch (memories)

Maeve and her daughter fleeing from attackers

Maeve defending her daughter and the homestead from intruders

Security teams arriving to the standoff at the homestead between Maeve, William and Lawrence ("Phase Space") 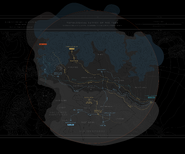 Retrieved from "https://westworld.fandom.com/wiki/The_Homestead?oldid=37749"
Community content is available under CC-BY-SA unless otherwise noted.