Edit
watch 01:42
What is The Maze?
Do you like this video?
Play Sound

The Maze is a symbol that is seen everywhere in Westworld, and throughout the history of the park.

The Maze is both a symbol that is seen everywhere in Westworld and throughout the history of the park, and a representation of Arnold's theory of creating consciousness.

The Man in Black convinced himself that this is a narrative that Arnold Weber wrote for guests. However, he was mistaken because the maze is not a narrative for guests. This maze symbol is seen throughout the park: on a tarot card, on a branding iron, plowed into a field, drawn into the ground, on coffins and a table top, and inside the scalp of Kissy.

Arnold modeled his theory of creating consciousness on his child's ball-in-a-maze game. Arnold told Dolores that the Maze was a secret "game" for her. Dolores is 'led' along on her path to consciousness by the voice of Arnold.

The Man in Black searches for clues about The Maze, because he wants to "dive deeper" into Westworld. He scalps an Indian host and finds The Maze beneath his scalp.[1]

The Man in Black rides up to a hanging, greets Lawrence by name, and after a brief conversation with Sheriff Reed, he kills everyone except the condemned man. The Man in Black removes Lawrence's blindfold and and throws him Kissy's scalp. He tells Lawrence that he wants to find the entrance to The Maze, and binds Lawrence's hands before riding away with Lawrence towed along behind.

Arnold offers to take away Dolores' feelings of grief about her dead parents, but Dolores doesn't want him to do this. She claims that her grief is the only thing she has left of them; this phrase has been said by other hosts, including Bernard and Maeve. As the conversation progresses, Dolores reveals that she feels that there is either something wrong with her world or with herself, and that she thinks she may be losing her mind. Arnold asks Dolores to play a secret game: The Maze. The goal of this game is to find the center of the maze, at which point Dolores will become "free". Dolores replies that she thinks she wants to be free.

Lawrence's daughter draws a Maze into the ground with a stick when Dolores meets her.[3]

The symbol is seen twice by Dolores in this episode. The first instance is on a tarot card that she takes from a Fortune Teller. The second instance is when she sees it on top of a wooden coffin. The Man in Black speaks with Dr. Ford about The Maze in a bar.[4]

The symbol is seen three times. It is carved into a table that Ford passes in Las Mudas, it is drawn on a page in the journal that he is looking at and the soldiers' branding iron is shaped like the Maze.

Teddy tells the Man in Black that the Maze is "the sum of a man's life" and that according to myth there is a man in the center who has been killed many times, but always came back to life. He supposedly returned one last time to defeat his enemies and built the Maze around his house to keep them out.[5]

The Man in Black tells Teddy that "the Maze revealed itself" to him when he killed Maeve and her daughter, and the Maze can be seen in the soil of the homestead.[6]

At the graveyard behind the church, Dolores digs out a wooden box that contains a Maze game. Arnold explains to her that he realized that consciousness is not a journey upward, as he had previously assumed, but a journey inward, like a maze. Dolores returns to the graveyard with the Man in Black. When she digs out the Maze again, he does not understand its meaning and becomes angry. He orders her to "unlock" the Maze but she tells him that it wasn't meant for him. After the Man in Black stabs Dolores, Ford finds him and explains that the park's narratives are games like the Maze, which is not for him but for the hosts. Ford later tells Dolores that the Maze was a test of empathy and imagination, and that she solved it after Arnold made the Reveries update. When Dolores is alone in the old field lab, she realizes that she has found the center of the Maze and understands what she has to do. Before Ford introduces his new narrative, he gives Bernard the Maze game.[8]

Antoine Costa scalps a Host and finds the image of the Maze underneath but has no idea what it is.

The Little Boy tells the Man in Black that he made it to the center of the maze.[9]

In Maeve's memories of the Ghost Nation attack, she is holding a stone with the Maze symbol.[10]

"The Riddle of the Sphinx"[]

The center of James Delos' records look like a maze.[11]

Akecheta first found the maze game at Escalante following the massacre carried out by Dolores and Teddy and Arnold's suicide and becomes obsessed with it. As he gained true consciousness he began to spread the symbol as a reminder of the falseness of "this world", including drawing it on the ground outside Maeve's homestead and tattooing it inside the scalps of his followers, such as Wanahton and, presumably, Kissy. He also gifted a stone with the maze drawn on it to Maeve's daughter.[12]

"Parce Domine" and "The Absence of Field"[]

When Caleb Nichols finds Dolores in the tunnel, there is a maze graffiti on the wall.

When Charlotte and Nathan Hale walk to Jake's apartment, someone is spraying a maze graffiti on a wall.

The rioters are using the maze symbol.

a coffin with The Maze symbol burned into it

tarot card with The Maze symbol on it

a branding iron of The Maze symbol 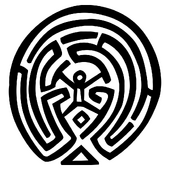 The Maze ploughed into the soil of a homestead

The Maze symbol drawn in the ground

The Maze from a Westworld promotional poster

The maze painted on a stone

The Incite logo contains a maze

Maze graffiti in the New World