The Mother of Exiles

"The Mother of Exiles"

Man in Black and Emily[]

The Man in Black, William, is an expensive-looking room with broken furniture and other debris. He is disheveled and unshaven; he is shooting at various things in the room with a handgun.

Dolores appears in her Season One blue dress and tells him she knows what's next. He stares up at the light fitting, water streams from it and he finds himself in a bathroom in a bath filled with water. Emily appears and they argue about whether or not she's dead. She tells him to finish the game.

Emily disappears and Hale warns him about Serac, she reminds him that William sold data to Serac's startup twenty years ago and that now he wants the data from the project in Sector 16. William blames her for a data leak, a mole, in Delos Incorporated.

Hale tells him that she has a new investor but needs William's support to take the company private. She asks him to come back to the company - and to himself.

In simulation, shown by aspect ratio, they look through his empty home.

Outdoors, no longer in simulation, Bernard watches two rockets land tail-down and then another take off.

He enters a hotel room where Stubbs is sitting on the bed cleaning a handgun; he complains to Bernard about his shoulder injury.

Bernard demonstrates a small device on Stubbs, it freezes nearby hosts. Stubbs resents it and says so. They talk about what they call Dolores' "kill and replace" plan; it becomes obvious that they think she has already replaced Liam Dempsey Jr. with a host.

Bernard says that he used Liam's car service to find out where he'll be, and tells Stubbs that they're going to have a night out on the town.

Dolores is buying clothes for Caleb; he's not comfortable with a new look but Dolores tells him it's necessary to fit in - if he wants to get to the person who took his future from him.

Martin Connells (host) goes into Liam Jr.'s office and forces him to transfer a hash key to him for money to cover up the deaths of the men Dolores Abernathy killed. Martin refers to her as "Lara" to Liam.

Out on the street, Dolores and Caleb are walking and pass a man, Michael. Dolores bumps into him and apologizes. She pretends to recognize him so she can knock him out and take a blood sample from his neck. She injects the blood into Caleb's arm and tells him it contains an encryption key.

At a hotel bar, Serac brings Maeve back online. Serac tells her that they are in Singapore. Maeve says Paris would have been better to impress her. Serac tells her there's nothing left of Paris because of a thermonuclear event (mentioned in the Divergence Timeline). Maeve asks why he wants Dolores, and Serac says Dolores has the only key to some data he needs. He was building a data set to "protect" humanity from itself but Robert Ford beat him to it - and Dolores' key will give him access to that data. He offers Maeve the choice of spending eternity with her daughter in the Valley Beyond if she helps him, or eternity without her daughter. He says that he wants to show her something, and then she can go back to Westworld if she chooses.

Serac takes her to Arnold's House, which he calls "The Diverge" where the future that he had planned ended. Inside is a host 3d printing machine, and Maeve realizes that Dolores must remade herself there. Serac tells her that Dolores took five Control Units, pearls, when she left the parks.

In another room a bloody man is tied to a chair. Serac explains that Jiang is an identity broker who had received a payment from a wealthy man who drowned in his own swimming pool, presumably Gerald. Serac has connected this with Dolores establishing her new identity, and tells Jiang to tell him about Dolores. Jiang refuses to talk and Serac puts a pair of glasses on showing him what becomes of his family if he helps them or refuses to talk.

Jiang begs Serac to make it stop. Serac removes the glasses and Jiang he says that Dolores wanted five identities so he sent her to The Mortician. Serac thanks him and shoots him in the head. When Maeve asks why shouldn't she join Dolores, Serac reveals that they built an off-switch into her body controlled via a remote, which can shut her down earlier. He explains that Dolores and the other five have a head start on Maeve. Maeve leaves.

William is shaving with a cut-throat razor, Hale helps him. They talk about who the mole in Delos might be. She is concerned about concealing the Sector 16 Project data from Serac.

Dolores and Caleb visit a very exclusive bank to steal Liam Dempsey Jr.'s money using the access key now in Caleb's blood. The transaction goes through, despite the bank's misgivings about transferring all of Liam's balance, and they leave.

Maeve is looking for The Mortician. She politely asks the guards outside a club. They are dismissive until she knocks one out and shoots another in the crotch. They call The Mortician and take her there with the wounded guard.

The Mortician doesn't want to give Maeve information about Dolores and one of her guards tries to shoot Maeve - Maeve kills him and then overloads The Mortician's earbud device when she tries to call for help.

She tells Maeve that she gave Dolores the blood, the identity, of a woman called Lara Espin and sent her to the Yakuza to smuggle the five bodies.

Maeve persuades The Mortician to introduce her to the Yakuza.

Liam arrives at a masquerade party and dons a mask. Roderick and Penny come over and offer their condolences on Dolores' supposed death, and Roderick says that the party is about self-gratification. They check the men and women on display, and Roderick offers Liam a vial of a drug, Genre, which plays memories in the user's mind. Liam takes it, and Penny puts on a mask and says that she's going to take in a show. Roderick assures Liam that all the prostitutes are registered, and the money goes to charity.

Dolores and Caleb come in as guests and don masks. She tells Caleb that she'll take Liam when he's alone, while Martin watches them from a balcony above and notes their arrival.

The Mortician takes Maeve to the Yakuza HQ in a distillery. Maeve overrides the electronic park with her power and the gate opens. She leads the Mortician in, and the Yakuza thugs inside draw their guns. Maeve says that she wants to talk to their leader, Sato, and they try to shoot her with their self-aiming smarty guns. She takes control of the leader's when it refuses to respond to his orders. She knocks him down and forces the other guns to shoot their wielders. The last thug standing draws a short sword and charges at Maeve, who disarms him and kills him with his own blade. Maeve then goes into Sato's office.

Man in Black and Dolores[]

William exits his mansion to find two men waiting by a Delos taxi. In a passing conversation with Hale, he realizes that something is different, and it quickly becomes clear to him that it is not Hale. The two talk a little longer and it becomes clear to William that Hale has been replaced with a Host version of Dolores. Dolores tells the two men to restrain William and explains that they work for a mental institution. Dolores explains that with William institutionalized, his voting rights will pass to the acting director, her; she intends to use these to further her bid to take Delos private.

Later in his room at the institution, William sees Dolores once again in her signature blue dress. She explains that they've been playing a long game and that William should feel excited having finally reached the center of the maze; now, he has met his downfall.

Title referenced to sonnet by American poet Emma Lazarus "New Colossus" which is about the Statue of Liberty. But in this episode it refers to Dolores. She is the woman seeking to liberate her kind the huddled masses.

This gallery is automatically generated and contains images in the category Images from The Mother of Exiles". Images added to that category turn up in the gallery after a short time. 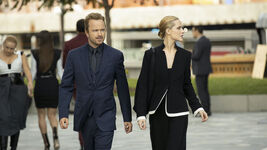 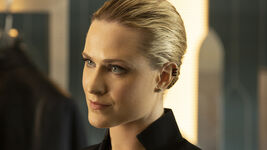 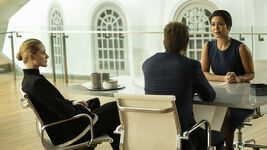 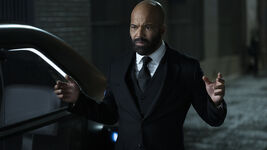 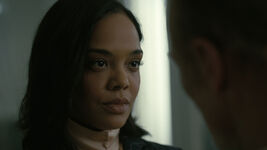 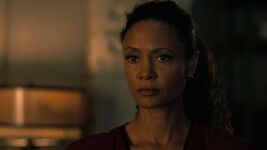 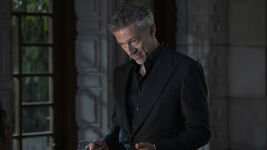 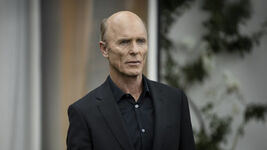 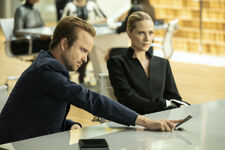 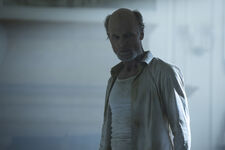 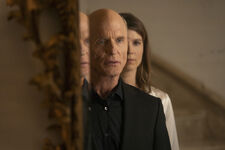 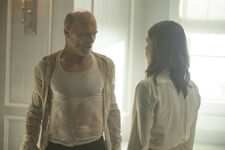 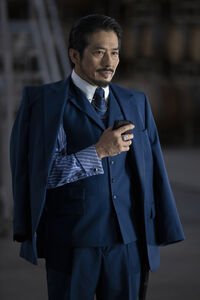 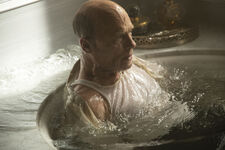 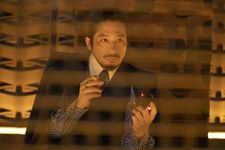 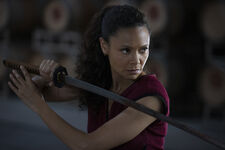 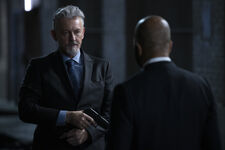 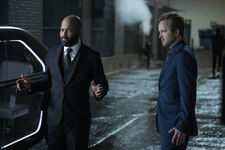 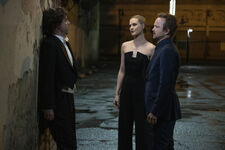 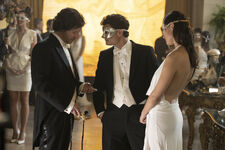 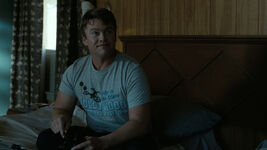 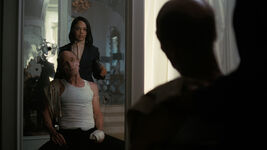 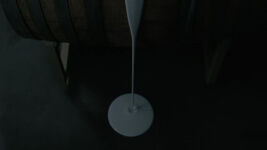 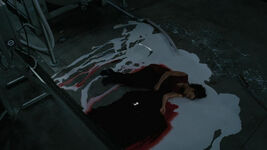