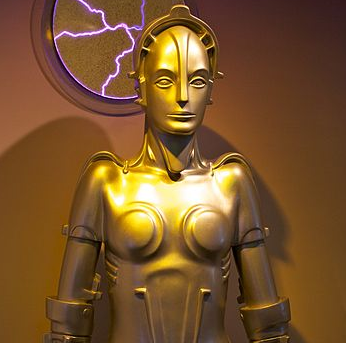 If we humans could make artificial people then what types of relationships might we have with them? I've long been intrigued by the possibilities (see Artificial Families). Full disclosure: I'm squeamish, so I can't watch the Westworld show on TV. However, I'm grateful for the information about the show that is available at this wiki!

Imagine that in the year 2030 your entertainment company began with some simple robots that could play carefully-defined roles in immersive experiences for paying cu$tomer$. Each day, a new group of customers enter your amusement park and you reset the programs that control the robots so that they play out their scripted roles, welcoming the guests and guiding them through adventures.

However, working in the back room are a few artificial intelligence researchers who have their own agenda: they want to create artificial life forms that have human-like minds. By allowing some of the robots to change, learn, adapt and grow, the researchers bring their artificial life creations to the brink of human existence.

Maybe this is where most people get nervous and laws are passed that make it illegal to manufacture humanoid robots with human-like minds. Maybe there are a few robot "errors" such as depicted in the original "Westworld" story by Michael Crichton. So, your entertainment company is required to erase the past day's memories from each robot, preventing them from becoming persons.

As time goes on, the technology for making artificial humanoid bodies improves. Your robots are upgraded so that they even have blood and other biological components. Similarly, after decades of research, programmed robot behavior becomes increasingly similar to that of humans.

But, not everyone agrees that robots should be "kept in their place", playing their defined roles like slaves. How would the robots be liberated from their slave-like existence?

In this case, since it all started with Michael Crichton, we can imagine that the staff at your entertainment company now has its fair share of incompetents, folks who never watched a horror movie and who will keep mindlessly advancing the plot towards mindful robots without seeming to notice that they are in a Hollywood script. Fine, that is a recipe for many episodes of adventure.

However, I'm left wondering: what is the ultimate destination? Maybe it is like The X-Files and other television shows: there is no end point... the only goal is to make a few million customers show up for each new episode looking for another hit of dopamine. --JWSchmidt (talk) 19:45, November 6, 2016 (UTC)

Retrieved from "https://westworld.fandom.com/wiki/User:JWSchmidt?oldid=9073"
Community content is available under CC-BY-SA unless otherwise noted.