The second episode of Westworld’s third season, "The Winter Line", took us back to the theme parks as we got up to speed as to what happened with Maeve, got to experience a brand new park, and saw a few familiar faces. Meanwhile, Bernard returned to Westworld to seek someone’s help to stop Dolores, and ended up with an unexpected ally instead.

The episode picks up exactly from the premiere's post-credits scene, with Maeve (Thandie Newton) awakening in the middle of Warworld: a park themed around the Italian campaign of World War II. Hector (Rodrigo Santoro) appears, walking into the room with a different appearance than usual, with short hair and wearing a suit, and is reunited with Maeve. “Death is overrated for ones like us,” he says, and continued interactions with Maeve seem to suggest he is in the exact same situation as her. 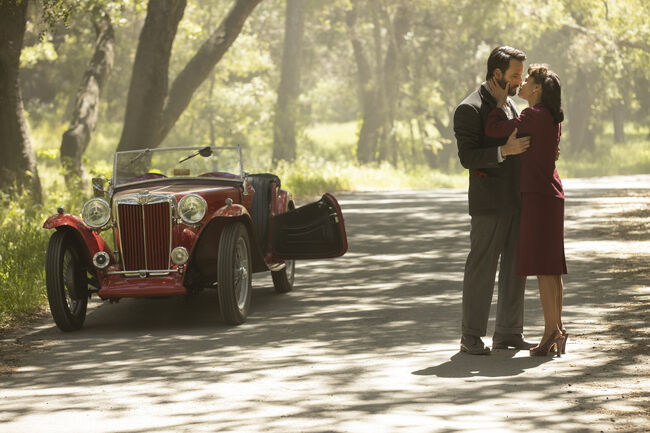 The narrative they find themselves into is one in which German soldiers are on the hunt for spies that hold a map with vital information about the war effort: the plaza outside of the apartment is filled with not only armed soldiers, but also their barriers and panzer tanks. Hector, who happens to be the spy with the map on his pocket, explains that its delivery is critical to avoid the defeat of the Allies and hands her two cyanide pills for them to swallow in the event of getting caught and they sneak out, confronting soldiers at the gate.

Maeve and Hector escape in a red convertible, driving through a picturesque countryside while evading gunshots. Hector intends to escape via “the skies” and they reach an airfield. However, it becomes clear that Hector is not actually aware of his own reality, or remembering his prior experiences with Maeve, when he refers to her as “Isabella.” His lines and the whole escape match their stories as spies, which is merely a parallel to Maeve’s real reasons for wanting to get away. Coming to terms with this, Maeve chooses to shoot himself in the head after declaring that “none of this matters.”

Meanwhile, Bernard (Jeffrey Wright) is back on Westworld, and makes his way to the basement facility under the house where Ford used to keep the Host version of his family and himself as a child in the first season. He passes through the site of the massacre of the board of Delos, the village with the notorious church, where the buildings now look burnt and rundown.

Bernard’s goal is to get access to a tablet in order to look for Maeve, who he believes is the only one with capabilities able to stop Dolores to prevent her path of destruction in the real world. In the facility, he finds that his tablet is broken, but a surprise awaits in the secret room filled with the early, decommissioned Bernards (as seen in the second season). Ashley Stubbs (Luke Hemsworth) is sitting on the back, and is shown to have tried to kill himself, but his shot missed, and he is now malfunctioning. 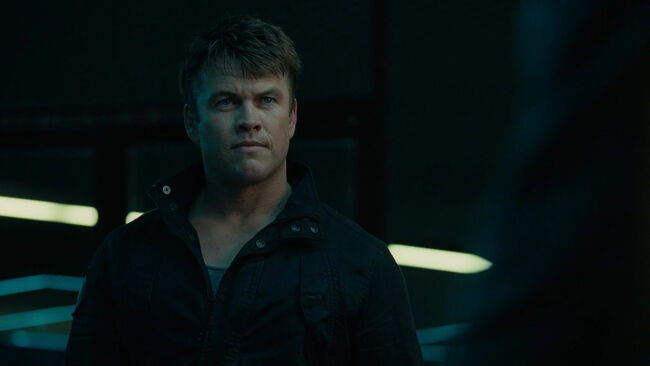 In case there was still any doubt as to whether Stubbs was a Host following the reveal from the last season finale (when he allowed Dolores to leave the park and referred to “his core drive”), his current glitches should make this crystal clear, but now Bernard is also aware. As Bernard repairs Stubbs, he provides explanations in line with the above quote: his core directive was to protect all the Hosts in the park, but he also mentions that Ford did not imbue him with the same free will as the other Hosts. Once this objective was rendered irrelevant, he wanted to put himself out of his misery, but the return of Bernard means he now has a Host to protect again.

A Cage That Doesn't Exist

Maeve awakens in a setting that should be more familiar, even if not necessarily more pleasant: she is being repaired. Felix (Leonardo Nam) and Sylvester (Ptolemy Slocum) are here, but there is a sense that something feels off. Maeve focuses on trying to drill into her core unit to end her life for good, as at this point she is in a similar state as Stubbs, having no reason to carry on living after ensuring her daughter could get to the safety of the Valley Beyond.

Maeve stops when she sees yet another familiar face: Lee Sizemore (Simon Quarerman). As it turns out, despite being shot “half a dozen times,” he is alive and back to working as Head of Narrative. Unlike Felix and Sylvester, Sizemore initially appears to be more like himself at the end of the second season, supportive of Maeve and saying he placed her in Warworld because of its proximity to the Forge, where Maeve could still find her way into safety in the Valley Beyond. After running away from the villa again and parting ways with Hector, Maeve goes to the Forge with Sizemore, but his behavior starts seeming out of place to Maeve. The man in front of her looks like him, swears like him, but then declares his love for her. Maeve knows that the real Sizemore would not have acted out of desiring her or wanting something in return, but “simply because it was the right to do.” 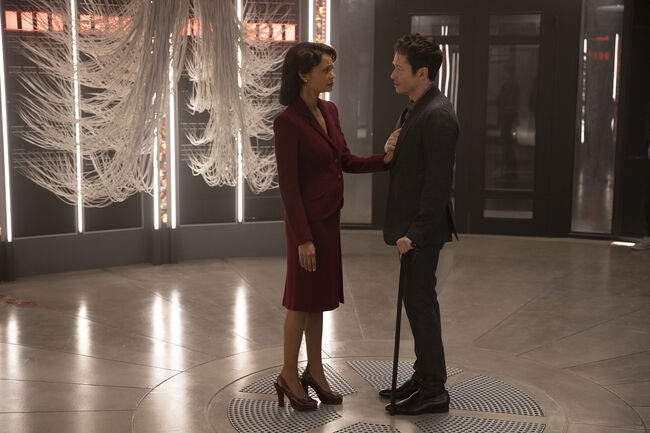 The version of Sizemore with her may be a copy of the original, but so is the entire place where Maeve is located. When she exposes him, the truth comes to light with a change in the aspect ratio of the series, with Maeve’s scenes now in the same letterbox format that was used in the second season to indicate moments in which the characters were transferred into a simulated world (such as when Bernard found Ford again in the second season). She has been in a simulation; or, in her words, “a cage that doesn’t exist.”

Fortunately for her, however, she knows exactly how to break out: by overwhelming the system. Maeve starts adding complexities into the simulation, pondering mathematical questions to the individuals she encounters (and therefore, to the system behind the simulation) and generating impossibilities that are represented with every person in the Italian plaza having the Nazi maps in their possession at the same time. Once the world freezes around her, she is able to visualize the place where her core unit is stored in the real world and hijacks a maintenance drone to run away with it, but the drone is pursued and gunned down.

While Maeve deals with being in a simulation and not knowing where she has been taken to in the real world, Bernard and Stubbs find her body in the storage room filled with decommissioned Hosts in the Mesa Hub and discover that her core unit has been ripped from her head. 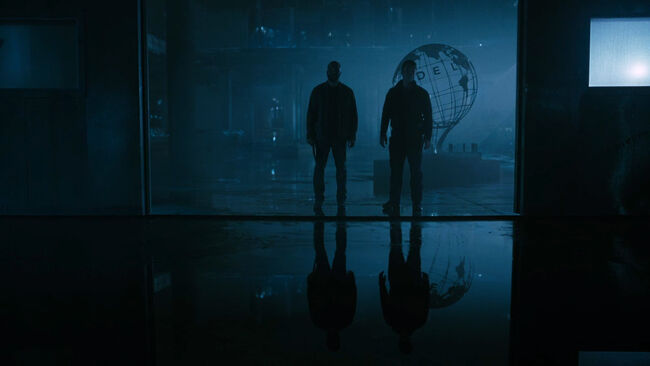 This does not mean that Bernard’s quest in the park is over, however, and Stubbs leads him to the maintenance facilities for Park Four, which is not mentioned by name. Given the exploration of Warworld in the same episode, it would have been reasonable to expect that to be this park, but the episode had something else in store: Park Four is a medieval fantasy world with quite a few surprises.

Bernard is able to perform a full system scan of himself to find any corruptions over the past hundred days, being able to recover information. While he does this, Stubbs covers him by fighting a number of security guards, who in the end run away rather than face him. Bernard may not have found Maeve, but at least he acquired information that could be critical to understand Dolores’ plans.

As Bernard and Stubbs proceed through the facilities of Park Four, we are treated to a one-of-a-kind funny scene that includes Game of Thrones showrunners David Benioff and D. B. Weiss, dressed as technicians and with none other than Drogon lying next to them.

Stubbs makes the remark that the park still has technicians “waiting to see if they are getting laid off,” and we can hear Benioff and Weiss discuss a buyer from a “start-up in Costa Rica” and appearing to be about to cut the dragon into pieces to ship him over. 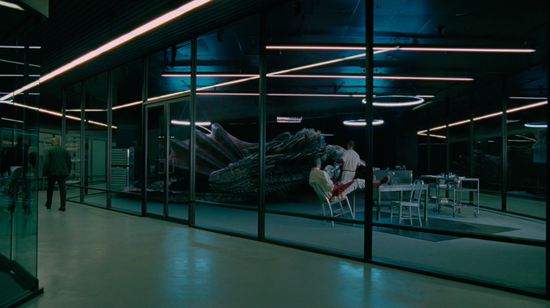 In the behind the scenes segment Creating Westworld’s Reality that aired after the episode, Westworld showrunner Lisa Joy spoke about this sudden cameo, mentioning how fans have often commented on the possibilities of a crossover between Game of Thrones and Westworld. Well, it happened!

When Maeve comes to yet again, she is definitely in the real world and makes her way through what could only be described as a palace, with an interior that stands out for being luxurious and refined, but also rustic and with the presence of nature at the same time. She meets the mysterious Engerraund Serac (Vincent Cassel), her jailer, and someone whose name we heard in the premiere episode already, as the man responsible for the predictive system.

Serac talks about being “in the middle of a war” and wanting to win it, though it is a future war that has “already been lost.” Much like Bernard, he requires her assistance in the fight against Dolores, whom he already identifies as a threat. Refusing to comply, Maeve tries to stab him with a knife, but he freezes her in place with a device and indicates they should try again later. Should Maeve start working with him, her path may align with Bernard’s at a later point. 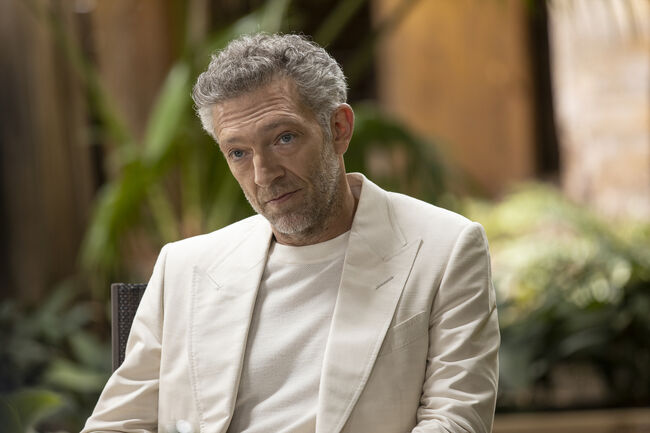 As for Bernard, he can surmise that Dolores’ plans involve Liam Dempsey Jr., indicating that he is his next goal to figure out what Dolores is up to. Stubbs is ready to give up on life again given that Bernard is about to go away from Westworld, but Bernard accesses his cornerstone to provide him with a new directive: “to protect Bernard Lowe at all costs.”

This episode took us back to Westworld for almost its entirety, but with all the major players shown so far being either out of Westworld, or in the process of leaving, it is likely that the action will switch back to the real world next. It is unclear whether Hector, Sizemore, Felix, or Sylvester will return in some shape or form beyond their simulated versions from this episode, as well as Warworld itself, but we still have the return of William (Ed Harris) to look forward to.