"The Absence of Field", the third episode in Westworld's game-changing third season, focused heavily on giving the viewers some much-needed context on the Host living as Charlotte Hale while establishing a relationship between Dolores and Caleb Nichols and taking us one step closer into the war with Serac.

The Charlotte Hale Host, a character that has been one of the main reasons for discussion amongst fans ever since the second season finale, finally had a moment to shine this season, and us viewers got to understand more about her existence.

After a scene that showed the real Hale recording a video message while the massacre was taking place in Westworld, we were able to see the birth of the current Hale Host; or rather, another Host being restored and receiving the mandate from Dolores to pose as Hale for the pair to be able to retain their presence within the board of Delos, a step necessary for there to be more Hosts among them. 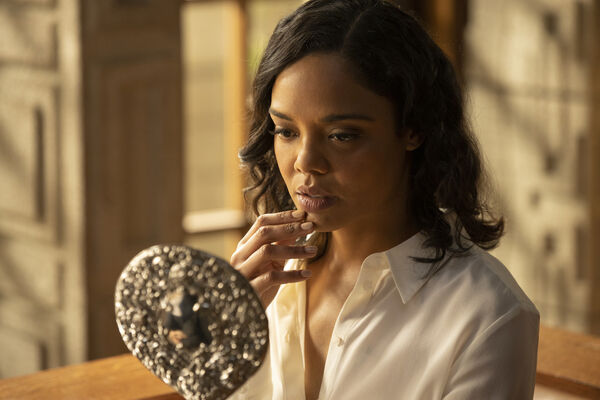 Taking over Hale's life goes much deeper than simply having a continued role in the company, as it also involves being Hale in all aspects of her daily life, including her relationship with her family: we are introduced to her former partner, Jake, and their son, Nathan. This situation takes a toll on the Host under Hale's skin, with an identity crisis emerging in the way of self-inflicted cuts.

When the Hale Host feels particularly vulnerable, Dolores has to step in and handle the situation, doing so in an almost human manner by using commands to limit Hale's emotions. Dolores presents herself as an authoritative figure and gives Hale orders; however, she also stays by Hale's side when asked, and both share a moment of intimacy that strongly suggests the Hale Host might be Teddy after all, which is supported by Dolores' mention of how the Host knows her better than anyone else. Nevertheless, this is never confirmed explicitly, which always leaves the possibility of an eventual twist showing that it is another Host. (Dolores' father? Clementine?) 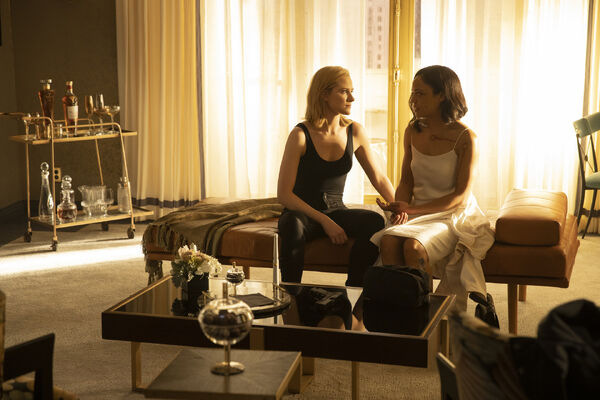 Ultimately, Hale's son Nathan appears to tether the Host into the real Hale's personality. The Host has maternal feelings for the child that are clearly strong. Seeing a pedophile make contact with Nathan in a park brings to the forefront the real Charlotte Hale's predatory ways. Coupled with the emotional reaction the Host has to the real Hale's video message, which is revealed to be a song for Nathan, it could be that this Host ends up being more like Hale than whoever its core unit originally belonged to.


Ghosts of Christmas Past and Future

Continuing from where the first episode left off, Caleb accompanied Dolores as she was taken into an ambulance, but they were not in the clear, as Dolores became a high value target in the Rico criminal app. They each went their own way after facing corrupt policemen, but Caleb became a high value target of his own and was hunted down. Two criminals threatened him (and seem to trigger a cardiac arrest by fiddling with the technology he has in the roof of his mouth) until Dolores appeared and saved his life.

What followed this was an attempt from Dolores to make Caleb understand what she is up against in scenes that episode writer Denise Thé refers to as akin to A Christmas Carol in the behind the scenes video Creating Westworld’s Reality for the episode. For Caleb's "Ghost of Christmas Past," Dolores takes him to the exact same spot in a diner where, as a kid, he was left behind by his mother, who had an episode before being institutionalized with schizophrenia. Dolores also makes the exact order the waitress brought him on the day, and hands him a transcript of what he said to the waitress as a child: it's like a direct window into his past that leaves Caleb shocked and, as he describes it, "enraged." 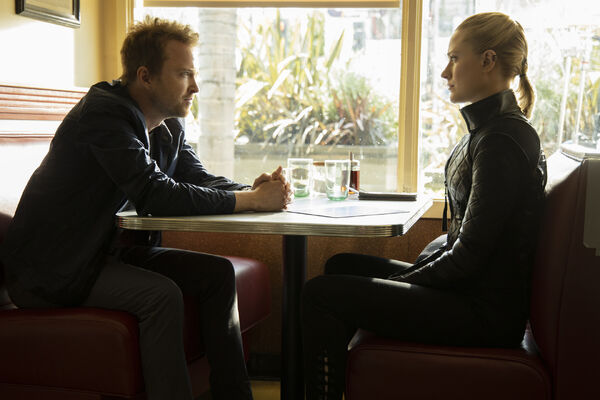 A bigger shock came later, when Dolores took Caleb into a pier to show him his future. Rehoboam, the predictive machine from Incite Inc., determined that due to Caleb's history of depression and his mother's situation, he would attempt to take his own life by jumping from the pier. Dolores hands him a tablet in which this information is collected for him to believe it, explaining that through prediction and control, the machine aims "to create a mirror world of this world." She offers to give him money so that he is able to run away, but Caleb is not having it, and would rather join her revolution. Dolores gains loyalty from a human ally by doing the opposite of what was done to all the Hosts in Westworld: protecting him, telling him the truth, and giving him a choice.

Hale's story in this episode is treated in a way that indicates a passage of time, which helped plant the seeds for a concurring side plot regarding a power play for the control of Delos. At first, it became apparent that there was an unknown mole within the board; later, the person responsible for the hostile takeover was revealed to be Engerraund Serac, and Delos also became aware that he took possession of Maeve Millay.

Although for a moment it seemed like there could be another mole entirely and Dolores mentioned to Hale that they would have to recur to an old friend to help with retaining control (most likely William, who used to run the place), it was later revealed that the real Hale herself had been the mole and was in contact with Serac, which the Hale Host plays along with. This creates exciting possibilities for the story of the hale Host, who is now suddenly a triple agent: mole for Dolores, while pretending to be a mole for Serac. 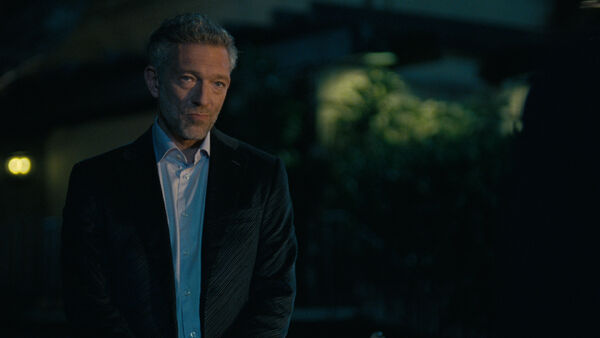 The interaction between Hale and Serac at the end of the episode also reveals Serac's current goal: he has obtained an amount of the Guest profiles collected by Delos in the parks, but wishes to have all of it. For that, he will need an access key that is buried within Dolores, which could be inciting enough for him to prepare a plan of attack.


Episode 2 Recap: The Winter Line <<
>> Episode 4 Recap: The Mother of Exiles
Retrieved from "https://westworld.fandom.com/wiki/User_blog:ReverieCode/Season_3,_Episode_3_Recap:_The_Absence_of_Field?oldid=40789"
Community content is available under CC-BY-SA unless otherwise noted.